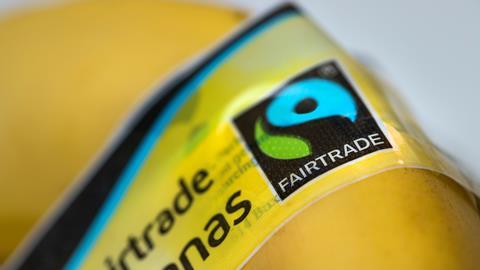 Several leading retailers are understood to be working with Fairtrade International to ensure that people employed on banana plantations are paid an acceptable living wage.

That’s according to Fairtrade International’s 2021/22 Annual Report, published today, in which the organisation outlines its efforts to secure better treatment of workers.

“The ability of workers to organise is fundamental to achieving decent work, including fair contracts, health and safety protections, gender equity, and a living wage,” the group states in the report.

“While the Fairtrade Standards spell out many requirements for plantations that hire workers, our ambition is that workers have the power to improve their own livelihoods and negotiate their terms of work.”

Sales of Fairtrade bananas were apparently stable in 2021 at just under 740,000 tonnes, with almost two-thirds of that volume organic, and earned a reported premium of €34.67m.

“Early in 2022, in the face of depressed banana prices, seven Latin American governments took the unprecedented step of calling for shared responsibility, fairer prices for farmers, and the use of the Fairtrade banana pricing methodology as a reference in the industry,” it notes. “The response to this advocacy will be seen early in 2023 as annual contracts are set.”

The top consumer markets for Fairtrade bananas in 2021 were the UK, Germany and France, with strong gains in Austria, Canada and Spain.

More than 90 per cent of Fairtrade bananas come from Latin America and the Caribbean, with Dominican Republic, Colombia and Ecuador the top three suppliers.

Following the group’s launch of a so-called ‘base wage’ for bananas in 2021, companies signed up to the Fairtrade model are required to pay at least 70 per cent of whatever is deemed to be a living wage in the region where they work.

Fairtrade says it will now carry out analysis across its major banana-producing areas to see what progress has been made.

“As founding members of the Global Living Wage Coalition, we initiate research on gender pay gaps in agricultural supply chains, among other topics,” it adds.

In late 2021, Faitrade launched a partnership with the Sustainable Trade Initiative (IDH) based on its salary matrix, a web-based tool that uses wage data to show the gap to the relevant region-specific living wage benchmark.

With independent certifier Flocert on hand to verify wage payments, a number of retailers now collaborate with Fairtrade to pay what it describes as a ‘living wage differential’ in proportion to the volumes they source, in order to help close the gap.

“In addition to the activities of our Workers’ Rights Advisory Committee, a number of projects support workers to know their rights, address unacceptable labour practices and strengthen collective bargaining,” it adds.

These include projects with workers on small-scale orange farms in Brazil (funded by Fairtrade Max Havelaar Switzerland), with flower workers in Ethiopia, and with vineyard workers in South Africa (funded by the Finnish Ministry for Foreign Affairs).