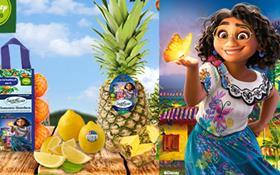 Simba from the Lion King, Elsa and Ana from Frozen, and Luca from, well, Luca. All of them characters at the heart of Disney-Pixar animated films, and all featured recently on products sold by fresh produce company SanLucar.

Now the group has added the Madrigal family, stars of the studios' latest release Encanto, to that marketing line-up.

Released on 24 November, the film tells the tale of a young Colombian girl called Mirabel Madrigal, who must save her family and their home, despite being the only family member without magical powers.

From Monday 15 November, the characters will appear on special packaging and stickers used to sell SanLucar mandarins, oranges, grapefruits, lemons, avocados, and pineapples in Germany and Austria.

'The Madrigals from Colombia bring so much happiness and magic to winter,” says Nuria Pizán, the company’s brand and creative director. “I’m sure that young and old will really want to snack our delicious fruits.”

For several years, SanLucar has encouraged healthy eating especially among children, which makes its partnerships with Walt Disney Studios all the more important.

'Taste and nutrition habits are formed in the first years of life, after all. And with the Disney collaboration, we want to offer another incentive for children to eat fresh, delicious fruit,” Pizán adds.

For the Encanto promotion, the group will provide retailers with eye-catching advertising point-of-sale materials including top signs, display stands and sales folders.

In addition, it will run a special competition on Facebook for retailers, who are invited to come up with the most attractive and creative presentation using the promoted products.

SanLucar also plans to raffle 50 Encanto fan packages, plus a trip for four people to Spain near Valencia, where the winners will visit SanLucar’s citrus farm.