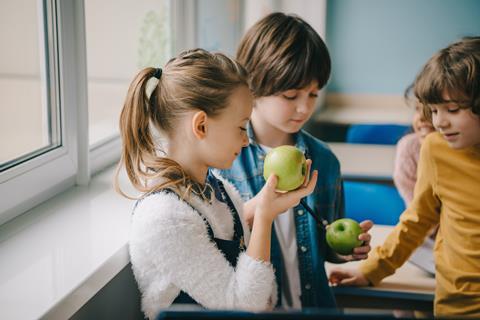 Freshfel Europe’s general delegate Philippe Binard highlighted the importance of the EU school fruit and vegetable scheme at a conference hosted by the European Commission.

Binard was one of the keynote speakers at the event, titled ‘An EU School Scheme Fit for the Future’, where he stressed the value of continued implementation of the School Scheme as well as areas in need of improvement to ensure the equal, efficient, and educational distribution of fresh fruit and vegetables to European school children.

Freshfel highlighted how the consumption of fresh fruits and vegetables in the EU was still well below the WHO minimum recommended daily intake of 400g per day.

”The lowest consumption levels are being seen among children and young adults, many eating at best only 200g per day, sometimes even much less,” Freshfel outlined. ”Obesity rates among children remain extremely worrying and unhealthy diets increase the risk of obesity epidemics and Non-Communicable Diseases (NCD), including cardio-vascular diseases, type 2 diabetes, and certain cancers.

”To reverse the negative trends, it is imperative to educate the youngest by introducing them to the taste, texture and diversity of fruit and vegetables.”

While the EU is currently evaluating the future of the scheme, Freshfel reminded of its relevance to educate children on taste, texture and diversity of fresh fruit and vegetables.

“It is important that the School Scheme primarily stick to its health and nutritional value,” said Binard.

”Educating the youngest is key to reversing the obesity rate and moving children towards a healthier diet for their future. The cost of social security due to unhealthy diets is at least twice the value of the food market.”

Today, close to 17m children have access to the School Scheme, based on a policy with a €130m EU budget, sometimes topped up by additional resources from national budgets.

The EU budget allows for the yearly distribution of around 70,000 tonnes of fresh fruit and vegetables every school term.

Considering that the volume at stake is not significant, the primary economic benefits for the sector are long-term, with indirect but essentials effects for the fresh produce sector, Freshfel said.

“Being a health driven programme, the main beneficiaries are the children who are being educated to taste, texture and diversity while improving their health while the sector is securing for the future consumers, well acquainted with fresh produce,” Binard noted.

”It also has a far-reaching societal benefit, for instance through reduced pressures and costs on social benefits and health care by contributing to healthier citizens.”

Freshfel also underlined that the School Scheme contributed to implementing several of the United Nation’s Sustainable Development Goals and was also well enshrined within the objectives of EU strategies such as the EU Green Deal, the Farm to Fork Strategy and the EU Beating Cancer Plan, aiming at moving towards a plant diet and healthier sustainable diet.

“The Scheme is a long-term investment, based on fruit and vegetable distribution mechanisms with educational tools,” the association noted.

Freshfel shared key priorities and recommendations for the further growth and efficiency of the Scheme within the upcoming reform.

”To achieve the highest impact, the EU School Scheme must include a diversity of products and avoid homogenic selections,” it said.

Complementary to their familiar selection of fruit and vegetables, children must be introduced to, and allowed to discover, new products, Freshfel said, noting that it entailed spreading knowledge on a diversity of production methods and origins, educating children further on local and non-local products and differences between organic and other production methods.

“The scheme should not be based on exclusivity or be diluted in to many criteria around sustainability,” Binard outlined. ”To be effective, the programme needs to secure the distribution of fresh fruit and vegetables in school within a reinforced schedule to be secured every day of the whole school term.

”This would imply the need to significantly increase the budget to match the expected outreach and ambitions of the Scheme,” he added. “In this respect a €1bn budget would be needed.”

Raising awareness of the Scheme and involving all stakeholders are other key recommendations for it to succeed in the long term, Freshfel said, with school management, teachers and parents needing to be more involved to better capitalise the positive benefits of the scheme.

”As the impact assessment of the Scheme is going on during the next few months, Freshfel Europe will continue its advocacy with decision makers to ensure that priorities and recommendations are taken on board towards the end of next year.”