Soil for the future 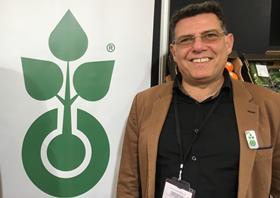 The lack of action on soil remains a concern, according to Dr agr Johannes Eisenbach, coordinator of the organic marketing platform for Greece and Cyprus, OMEN (Organic Marketing & Export Network). He is also president of the Berlin-based Association for Biocyclic Vegan Farming and the driving force behind the Biocyclic Vegan Standard for a new form of agriculture dedicated to restoring and maintaining natural lifecycles and natural soil fertility, without animal husbandry or animal-derived agricultural inputs.

Despite his concern, Eisenbach sees the perfect manure substitute in so-called “biocyclic humus soil”, which he believes may be central to diminishing producers’ dependence on chemical inputs in the years to come.

Since Covid-19, organics have seen significant growth in sales. Does this trend bode well for the Biocyclic Vegan Standard and for the environment in general?

Johannes Eisenbach: Over the last few years, organics have certainly increased their shelf space at the big retailers. Today, there are even organic restaurants. There’s a huge one in Austria that now wants to go further and introduce more Biocyclic Vegan Standard products. Awareness is growing about the Biocyclic Vegan Standard, including among producers. Every week there’s a new grower being certified, and producers are joining us from all over Europe. Beans from Hungary can now be certified. In Austria and Germany, Denn’s organic shops have a cardboard display promoting Biocyclic Vegan certification. These are the first steps. But we are still waiting for the big breakthrough.

Veganism has also become a big trend in recent years…

JE: Unfortunately, the Biocyclic Vegan Standard is not well understood, not even by vegetarians and vegans. Vegan products are filling the shelves, but few people ask how some of these items are produced. It makes sense to produce in a vegan way from seed to fork, but despite the increase in veganism, retailers don’t recognise the demand. Nevertheless, the movement is growing. There are now Biocyclic Vegan associations in Germany, Sweden, the Netherlands, France, Germany, Switzerland and Greece.

What is it about the standard that is misunderstood?

JE: We found solutions to a problem that is not yet acknowledged as a problem. Each cultivated plot of a biocyclic vegan operation has to be evaluated as to its interaction with its natural and anthropogenic environment using the Biocyclic Operation Index (BOI). This involves taking measures to enhance biodiversity and wildlife and offering protection from outside contamination. If a farmer knows that there is spraying going on next door, for instance, then the produce shouldn’t be marketed as Biocyclic Vegan.

How does the BOI work?

JE: It is a biodiversity and security index with a scale from 0 to 10. It makes comparable all kinds of agricultural operations. We’ve used it continuously since 2002 and seen it work perfectly in every climate, in every country, whether on small-scale farms or large-scale with hundreds of hectares. By looking at the borders of a farm, you can discover everything. If an organic orange tree is not protected by a suitable border, chemical residues from conventional farms may be detectable. Then the organic farmer is in danger of losing their certificate, or the packhouse their business with a particular customer. Or the quality seal may be jeopardised.

Unprotected organic borders are common in many countries with highly productive agriculture, such as Germany. Few consider the dangers of contamination, but it’s a big problem. You find small traces – really, really low levels. It is clearly residue contamination due to a lack of such protections. There is no other mechanism that works to find these crucial points upstream. By performing the BOI, we identify the dangerous parts of the border and discuss measures to be taken to avoid contamination.

How can you get consumers more engaged?

JE: One of our main roles is to create awareness that it’s not enough to say that beans are vegan simply because they are a plant. They must be produced in a vegan way. This is how we mitigate climate change – by shifting from animal-based to plant-based agriculture, and by replacing animal fertilisers with plant-based fertilisers or humus soil. That way, the carbon is kept locked into the soil. By increasing the humus content of the upper 25cm of the soil by just 0.5 per cent on 10 per cent of arable land worldwide, we could cut annual manmade CO2 emissions by 70 per cent.

If humus soil is the solution for the future of soils, what is it that people can do now?

JE: We are planning to launch the Biocyclic Humus Fund. We want to invite people who are looking for ways to contribute to solutions, and show them how they can act now. The results will only be visible in 10-20 years, in the increased organic matter of soil worldwide, but this would help us to solve issues of yield, world nutrition and climate change.

How will the Fund work?

JE: It will allow someone to invest in a humus certificate, with an interest rate of say 2 per cent per year, kind of like a humus soil equivalent-based currency. We want to give incentives to those who produce compost to keep part of their production aside – not to sell it immediately – and instead to ripen it into humus soil.

Commercial compost plants try to sell their compost as quickly as possible. This means that most compost has just passed the first phase of degradation, which means it is a nutrient-stabilised soil conditioner. But the next phase, which takes time, creates a nutrient- and carbon-stabilised substrate called humus soil. We want people to treat the compost for two to three years.

The humus soil currency would be tradable. If a company wanted to show they were doing something for the environment, they could buy this humus currency. A lot of people ask how they can invest their money. They don’t want to buy shares, they want to invest in something stable or something that will help for the future. This could be a nice tool to do that. It would play a major role in solving big problems in agricultural production in the future.