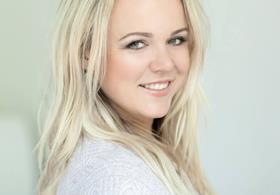 The Chilean Blueberry Committee (CBC) has appointed chef Sophie Michell as brand ambassador for its forthcoming UK campaign, which kicks off this month.

'We’re planning a range of activities around Pancake Day, which coincides with one of the peak arrival weeks for our blueberries,” said the committee's executive director Andrés Armstrong. “Sophie Michell has come up with recipes to inspire consumers to add blueberries to their pancake mix as a healthy alternative to syrup and other sugary sauces.”

This ties in with the growing anti-sugar movement in the UK that is fuelling demand for healthier alternatives such as fruit and it is a message that the committee is keen to tap into.

Chile is looking to make gains across Europe by consolidating its position in established markets while increasing penetration in newer markets.

Elsewhere in Europe the CBC has a full-line up of marketing activities planned for 2015/16 including for the first time, promotions in France and Ireland – both markets in which Armstrong sees good potential.

Green Week will be a key focus of the committee’s promotions in Germany, while it has also developed has developed a series of recipes available by App aimed squarely at the Millennial generation which are linked to the main retail chains showing the product’s availability.

In France the committee recently has launched its first ever campaign in conjunction with Asoex and ProChile by inviting representatives from the specialist press to an event introducing them to the characteristics, health benefits and availability of Chilean blueberries. France currently imports around 550 tonnes of blueberries a year, mainly from other EU countries.

“At just 10g, per capita consumption in France is far lower than in the UK (500g) and Germany (1kg),” said Armstrong. “At the same time, France is a big consumer of Chilean fruit in general and a market in which we already have well established distribution channels. We see huge potential to increase blueberry consumption and our campaign will seek to reinforce Chile’s position as the Southern Hemisphere’s number one exporter of this product.”

The campaign will include point-of-sale promotions at leading retailers Auchan and Monoprix during January and February as volumes peak.

Meanwhile, the CBC is looking to reinforce its presence in Nordic markets through point-of-sale activities in Sweden and Norway. The committee embarked on its first campaign in these markets two seasons ago and these have generated very positive results, according to Armstrong.