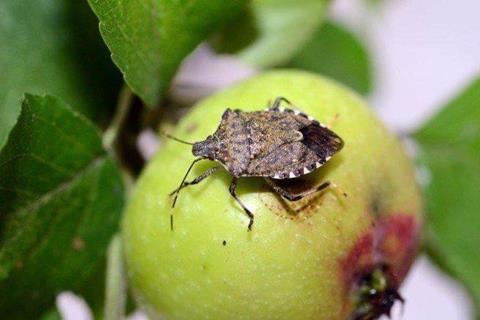 Fruit crops including pears, apples and kiwifruit in some of Italy's major producing regions are reportedly under grave threat following an unusually widespread outbreak of brown marmorated stink bug.

The insect, which is native to several Asian countries and has recently established itself as a pest in part of Europe, North America and South America, is said to be worryingly prevalent this year across much of northern Italy, including Piedmont Lombardy, Emilia-Romagna, Veneto, Trentino-South Tyrol and Friuli-Venezia Giulia.

According to reports, the outbreak is so serious that some believe it threatens to wipe out Italy's entire pear crop, with estimated potential damage to that sector alone ranging from €250m to in excess of €400m.

Giorgio Mercuri, president of national cooperatives alliance ACI's agricultural division, called on the government to set up an emergency committee of ministerial and regional representatives to tackle the problem, which he said had been further aggravated by an unseasonable climate.

'This dramatic crisis, whose financial impact on businesses is remarkable, is now also expanding to other products – vegetables, soy and wheat – and regions such as Friuli Venezia Giulia and Piedmont, and is predicted that the damage will further increase,' he said.

Agricultural body Confagricoltura's Emilia Romagna office released a statement confirming the bug had been detected in Italy's so-called golden quadrilateral, an area linking Ferrara, Modena, Bologna and Ravenna that is responsible for producing almost three-quarters of the country's pear crop.

The group's regional president Albano Bergami, who also produces pears near Ferrara, underscored the severity of the episode. 'The reality is beyond our imagination and even more negative than any ominous initial forecast,' he commented.

'Serious damage caused by the Asian bug is also being found on all varieties of pears, including Santa Maria in full harvest and even in the areas where the killer insect in the past had never appeared, so much so that now its presence can be considered endemic.'

Even where crops are protected, for example with netting, the magnitude of the outbreak and the sheer number of bugs is apparently leading to damage that renders the remaining crops unprofitable.

'Some of our fellow producers have already left the pear plants to their fate because of [brown marmorated stink bug],' revealed Simone Spreafico, owner and director of Spreafico, one of Italy's largest fresh produce marketers, in conversation with Italiafruit.

A video recorded by Spreafico and posted on the Italiafruit website late last week showed a massive swarm of stink bugs apparently at a pear orchard in Veneto.

'The latest case was this week: a 40ha farm in Rovigo, which had just started harvesting the summer variety Santa Maria,' Spreafico added. 'After having seen the huge damage to the fruit, the owner decided to abandon all operations.'

Even with covers, he said, volume losses would still be around 30-40 per cent. 'Younger bugs, in fact, are so small that they can often slip into nets. We can do nothing to counter them. Unfortunately, this insect will take away even the little pears that we expected to harvest this year.'

As far as Spreafico was concerned, it made no sense to produce if only two-thirds of the potential production ends up being viable. 'It can be done for a year, two at most,' he told Italiafruit. 'The 2019 vintage is considered lost. Next year, we will be forced to cut down the trees.

'As producers we need immediate responses from government and research bodies, so we can overcome the bug problem in the shortest possible time.'

Fruitnet understands that some producers in Italy are looking to adopt control measures similar to those employed in other parts of Europe and the US, whereaffected growers have been known to deploy an insect known as the Samurai wasp to bring stink bug infestations under control.

The wasps are known to deposit eggs in the bug's own eggs, which then die as the parasitic larvae grow.