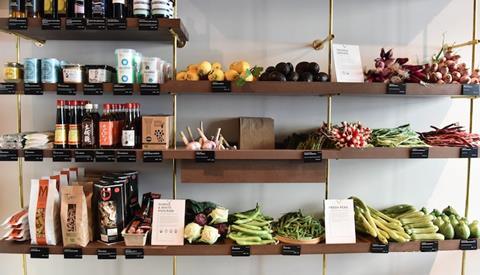 Seasonality, traceability and sustainability are very much at the root of Natoora Counter, a new café concept that opened its doors in the affluent London district Notting Hill earlier this year. Located on Elgin Crescent, yards from the bookshop where characters played by Hugh Grant and Julia Roberts first meet in the 1994 film Notting Hill, it goes beyond the traditional grocery shop format to offer breakfast, lunch, coffee and snacks from a daily changing menu that, according to its owners, is “radically seasonal and entirely traceable”.

London-based fruit and vegetable importer Natoora has spent the past decade and a half working to bring transparency and sustainability to the fresh produce supply chain by sourcing high-quality traceable products from across Europe. Working direct with small-scale growers, the company supplies over 800 of London’s top chefs and 400 more across New York and Paris, as well as running four boutique retail stores in central London.

Now, it is turning its attention to its own foodservice plans with the opening of this, its first café in the UK capital. Every ingredient, it says, is sourced direct from individual producers and growers who are all on first-name terms with the company. 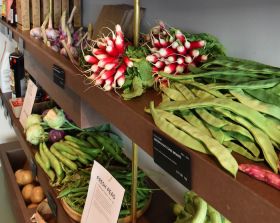 “Natoora Counter is completely revolutionary within the industry and yet was a very natural progression for us,” explains chief executive Franco Fubini. “All the work we’ve done to our supply chain doesn’t stop at a restaurant door. Nobody else has dared to address the food system at this level, tackling so many facets simultaneously with such clarity of vision. We are determined to create a better future of food and this involves everyone, the consumer as well as the farmer.”

Natoora’s concept is rooted in ‘radical seasonality’, the notion that every day can be seen as a new season. To that end, the Counter’s menu and produce range “adapt to natural shifts in flavour that happen every day”. Its dishes, the company says, capture “the crossover between these unique seasons”, pairing for example the last of the English asparagus with peak-season piattone beans from Campania. “With Natoora Counter we are creating demand for flavour, seasonality and traceability,” Fubini adds, “and then putting everything back into the right people on the right farms, so that the system will correct itself.”