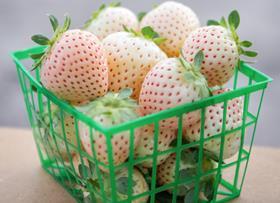 The University of Florida Institute of Food and Agricultural Services (UF/IFAS) has announced it is releasing two new strawberry varieties, one of which will be the first white strawberry to go to market in the country.

The varieties are being launched just in time for the west-central Florida strawberry harvesting season, which runs from now until the end of March.

According to Vance Whitaker, an associate professor of horticultural sciences and a strawberry breeder at UF/IFAS, neither variety has been named, known as they are by the numbers FL 16.78-109 (white) and FL 16.30-128 (red).

“Because the white strawberry is being test-marketed this year, there has been a lot of interest in it,” said Whitaker, a faculty member at the Gulf Coast Research and Education Center.

The white strawberry, which apparently has a hint of pineapple, it is white inside and out, with a slight pink blush on the skin and red seeds, he said.

“The flavour is very different from a typical strawberry, sweet but with a pineapple-like aroma,” Whitaker said. “White strawberries have been popular for some time in Japan, but this is expected to be the first white strawberry on the market in the United States.”

In 2012, strawberry seeds from Japan were sown at the University of Florida, and a few small plants recovered. The pollen from these plants were crossed with a Florida variety, with the seedlings from this cross-produced fruit ranging from white to pink to red, Whitaker said.

“Commercial trials have been promising so far,” he outlined. “Pickers can tell when the fruit is ripe when a slight pink blush develops on the side of the fruit that is most exposed to the sun, and when most of the seeds turn red.

'By 2022, these new white strawberries should be available in U.S. grocery stores. They will probably be marketed as 'pineberries' because of the pineapple aroma.”

As harvest arrives, farmers will welcome the new red and white strawberries from UF/IFAS, Whitaker said.

Out of the 10,000 acres of strawberries in west-central Florida, the new red strawberry may occupy as much as 300 acres in Florida during the 2021/22 season, and if it continues to perform well, that number could grow.

The white strawberry will be grown on fewer acres since it is a new specialty product. It will take time for farmers to become comfortable growing it, and it will also take time to educate consumers about this new fruit.

“The new red strawberry is notable for its outstanding flavour,” Whitaker said. “Because of its high sugar level, it tastes somewhat similar to (another UF/IFAS variety called) Sensation, which is currently one of the leading varieties in Florida, yet with a more intense flavour due to the fruit’s higher acid content.”

UF/IFAS researchers and the Florida Strawberry Growers Association estimate strawberries generate about US$300m annually for those who farm them.