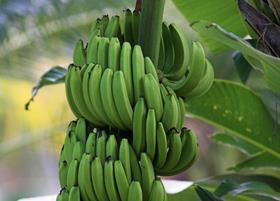 When Hurricane Dean hit Dominica in August 2007, it decimated the Caribbean island’s vital banana industry to such an extent that it has still not fully recovered, with volumes remaining limited.

In order to revive the industry, the island’s growers need seedlings of the correct variety from countries with expertise in this field, according to Reza Mansuri, marketing manager at Iranian trader Zarrin Group.

“One of those countries is India,” he said, “the biggest banana producer in the world.”

Tehran-based Zarrin Group is a major importer of bananas from India, with close connections with banana suppliers in the country.
“They developed this industry,” Mansuri stated. “We know big suppliers that have their own laboratories for studying and growing seedlings of different banana varieties based on various climates.”

In the past, he said, Zarrin had been able to assist producers in the Philippines in the same way.

'Our CEO Alireza Emami had a meeting with Hubert Charles, ambassador of Dominica to the UAE, Ian Douglas, Dominica's minister of trade, energy and employment, and Kenneth Darroux, Dominica's minister of foreign affairs, during Dubai Expo 2020, which was delayed until last year due to Covid-19,' said Mansuri. 'They discussed reviving Dominica's banana industry, and because of our CEO's experience he was invited to visit farms and facilities in Dominica.'

According to Mansuri, ambassador Hubert Charles, who has been appointed by the Dominica government as its representative on the project, is in discussions with the Climate Resilience Agency for Dominica (CREAD), an agency that assists in sustainable economic development, to gather the required data on climate, soil and water so that Zarrin can draw up a detailed schedule.

“Based on information on their climate, soil and other factors, we will be providing the facilities and knowledge, as well as banana varieties grown in Indian laboratories that are compatible with Dominica’s climate,' Mansuri explained. 'In this way, we hope to revive and further develop the banana industry on the island.”