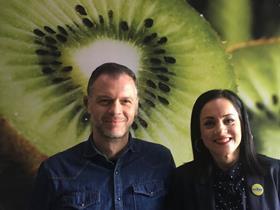 Brexit fatigue is a sensation as familiar to suppliers to the UK market as it is to UK residents, summarising a feeling of exasperation at a state of seemingly indefinite uncertainty. Much of the frustration stems not from the very real sense that leaving the EU will be harmful to the UK, but from a total inability to stay abreast of the developments in any meaningful way. Promises are made and then binned in the next breath, political compromises mooted before being instantly scuppered, while a continuous stream of misleading or outright false statements pervade the airwaves, making both short- and long-term planning fraught with peril.

For suppliers largely reliant on the UK market, including Greek exporter Zeus Kiwi, there is little alternative but to remain as informed as possible while hoping for the best. “Around 40 per cent of our kiwifruit business and 90-95 per cent of our grape business are with the UK,” says sales manager Antonis Ioannidis. “We have been knocking on doors and keeping our eyes open for alternative markets, but the UK is so important. We’ve been there for more than 20 years and serve pretty much everyone. We are very well established there.”

According to Ioannidis, Zeus Kiwi made some preparations for a no-deal Brexit prior to the original March exit date, especially with its main customers. “We had the procedures in place and good communications with the Greek embassy in London,” he says. “Delays were our biggest concern, so we ensured there were extra volumes to minimise the risk of shortages. The big surprise was that not all the UK companies we work with were trying to come up with a backup plan, with many just waiting to see what would happen.”

Regardless of the developments on Brexit, finding new markets is a must for Zeus Kiwi. “In the last five or six years, we have been constantly increasing volumes, so we have been looking for new opportunities, for both kiwifruit and grapes,” says Ioannidis. “Scandinavia fits our business model well, as they like to secure commitments for the whole season, like in the UK.”

The company is also increasing its kiwifruit exports to the East Coast of the US, in Philadelphia and New York, while China too is absorbing large volumes. “We are now going to try Hong Kong for our grapes,” says Ioannidis, “not huge volumes. We want to gain experience of the long two-to-three-week transit time, then we can look at pushing volumes.”

According to Ioannidis, differences between Chinese and US consumers make it imperative to tailor the product to the market’s specific needs. “In the US, it’s all about quality,” he reveals, “taste, shape, colour, packaging. In China, they are very interested in the yellow-flesh variety. We have our own breeding programme for yellow kiwifruit. We have done some grafts to see how the crop grows in real conditions. Hopefully in a few years we will have something to offer, but we are on the right track.”

As for sustainability, Zeus Kiwi was the first company worldwide to publish a lifecycle analysis (LCA) for its kiwifruit production back in 2012. “Since then we have been focusing on our growing practices, chemical programmes and energy consumption,” says general manager Christina Manossis. “The idea is to be able to undertake another LCA in order to show the reduction in carbon dioxide emissions on our farms. This is a continuous programme that we are keen to keep working on with our growers.”