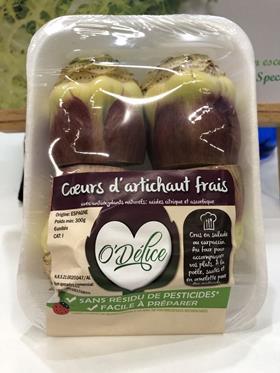 Joséphine Cuadras at the Medfel trade show with the winning product

The product, which is set to launch in November and has been developed in conjunction with the University of Murcia, is designed to make it less time-consuming for consumers to prepare the delicacy in a bid to drive up consumption.

The product will be sold in packs of four, six or eight hearts (with the leaves already removed), but decisions are yet to be made on whether to use biodegradable packaging.

The awards, which were judged by a panel of directors from fresh produce suppliers, retailers and innovation specialists, reward products that add value or improve performance and efficiency in the supply chain.

In wholehead artichokes, Cuadraspania already exports to France, the UK and the Netherlands, but it is not limiting itself to these markets in its new prepared product, saying it is looking for sales in all European markets.

Beyond the product’s convenience, the producer’s manager Joséphine Cuadras stressed the importance of communicating the health benefits of artichokes, which are thought to improve liver and heart health, as well as being a rich source of fibre, vitamins and minerals, and regulating blood pressure.

“Consumers have to know that the product’s good for them and then it has to be easy to prepare,” said Cuadras, adding that she sees sales potential for the convenience product in the UK given the recent success of kale, which ticks both of these boxes.

“English people like artichoke but they have no tradition of cooking it,” she said. “Hopefully this product can help change that.”

It is also important that consumers are educated in how to cook the vegetable, Cuadras added, with plans to include a recipe card in each pack for inspiration.

Similar products already exist on the European market, with consumers able to buy artichoke hearts canned or in jars with water or oil, however it will be the first time that fresh cut artichoke is available in such a prepared format. A less prepared version, with some leaves still attached, was launched in Italy two years ago.

Aside from the jury prize, the public vote was won by a collaboration between food waste distributor Phenix and organic supplier Alterbio to reduce waste in the supply chain and link growers to local charities.