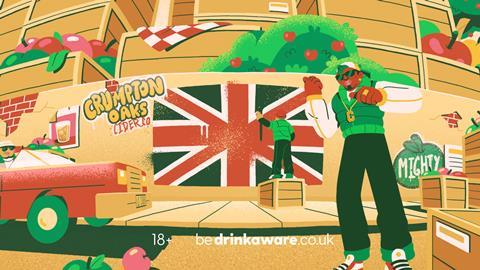 Designed to “bring attitude back into the cider category”, Aston Manor Cider said it had launched the campaign to bring to life the personality and fun behind the Crumpton Oaks brand and target 25-35 year-olds.

The illustrated animation Straight Outta Crumpton TV advert sees Aston Manor bring to life the world of cider through the lens of hip-hop, from break dancers and low riders to golden mouth grills and DJ decks.

As well as launching on TV for the first time, the campaign will be supported through wider media placements.

Calli O’Brien, head of marketing at Aston Manor Cider, said: “It’s a great moment for the company to be unveiling our first-ever TV advert. We wanted to launch with something that would create waves, disrupt the status quo and stand out, and we believe this new campaign does just that. We’re looking to target 25-35 year-olds while engaging loyal Crumpton Oaks fans.

“We decided to create a play on N.W.A’s ‘Straight Outta Compton’ because it is a song that resonates with both loyal and new cider drinkers. The former being those who remember the 1989 hit releasing and paving the way for modern day hip-hop, and the new consumers who had the hit playing in their homes while growing up.

“Crumpton Oaks represents inclusion and affordability, because we believe that everyone deserves a great pint. We are delighted to be able to raise awareness of our flagship cider brand, which is especially important during the current financial challenges that we are all facing into.”

Crumpton Oaks Apple Cider is a medium cider, made from pressed bittersweet apples, which are blended with the juice from crisp dessert apples and then fermented to achieve a full-flavoured refreshing cider, the company explained.