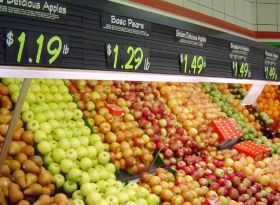 A year-end report examining the role of the economy on produce sales in the US during the fourth quarter (Q4) of 2008 has been published by the United Fresh Research & Education Foundation, entitled 'Fresh Facts on Retail'.

The report, which is released in conjunction with Del Monte Fresh Produce and recaps retail sales trends for fruit and vegetables, convenience products, organic produce and fresh meals and salads, analyses the impact of the current economic crisis on the fresh produce market.

Weekly sales of produce per store grew 2.3 per cent on the previous year, the report found, driven by retail prices 6.1 per cent higher than in 2007, while the volume of produce movement fell 3.6 per cent.

In terms of the top-ten selling fruits, only grapes, strawberries and avocados increased in volume year over year, while not a single top-ten selling vegetable showed an increase, according to United Fresh.

"The economy is clearly having an impact on these Q4 volume declines," Victoria Backer, senior vice-president for member services at United Fresh. "But this won't be the end of the story, as produce companies and retailers are adapting to ways to move more produce even in these difficult times."