Dubai's Fresh Market has opened its first display of Israeli fresh produce, as the two countries work to normalise relations 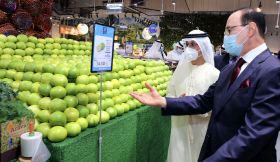 The Fresh Market in Dubai’s Ras Al Khor area, which is run by the Dubai Municipality, this week unveiled its first-ever display of Israeli produce, less than a month since the ratification of the normalisation agreement between the UAE and Israel.

According to a statement from the government, the introduction of Israeli produce forms part of Dubai's effort to diversify its sources of imported produce in the UAE. The two countries have also agreed to undertake "reciprocal initiatives to establish diplomatic and business links, promote investment and tourism and launch direct flights connecting the two countries".

The event was also attended by Shlomi Fogel, chairman of Israel's Carmel Agrexco. "We are excited to be part of the growing ties between Israel and the UAE," he said. "Together with our colleagues in Dubai, we are beginning to see the ‘fruits of peace’ today."

Fogel said that the geographical proximity of the two countries offered significant advantages for fresh agricultural products, not least the speed with which produce can be transported directly from Israel to markets in the UAE and beyond.

"Within a few hours of picking, the fresh produce can reach points of sale," he said. "It’s a fact that Israeli agriculture is highly advanced and we are confident that everyone will enjoy our produce.”

According to Fogel, Carmel Agrexco also intends to invest in farms in the UAE, incorporating the latest innovations in agro-technology.