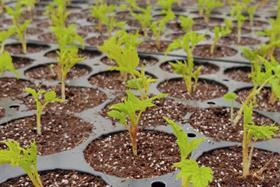 Biological control firm Biobest says its three-prong approach to controlling sciarid flies, Duponchelia and thrips in raspberry plants without having to resort to chemicals is proving 'highly effective'.

The company's Arno Hellemons, who advises several large and small raspberry propagators in Belgium and the Netherlands, commented: 'In raspberry propagation, sciarid flies (Sciaridae) are the most troublesome pest. However, Duponchelia moth and thrips are also very common. The mother plants are initially grown outside in pots, attracting a wide range of insects. When the root balls are divided, the propagator moves the plants indoors in containers, or on tables, and covers the roots with growing media. From this point, we recommend using a combination of three beneficial insects to ensure they are pest-free.'

He advised propagators to first apply Steinernema-System to the growing media. 'These microscopically small Steinernema feltiae nematodes actively search for sciarid and thrips larvae,' he said. 'To be effective, we recommend repeating the treatment every two weeks.'

The second component is Hypoaspis-System, which should be applied immediately after covering the roots. “This robust predatory mite, Stratiolaelaps scimitus (Hypoaspis miles), lives in the top layer of the growing media feeding on Sciarid fly larvae and eggs as well as thrips pupae,' said Hellemons. 'This predator has the major advantage that it can survive several weeks without prey. Again, it should be introduced fortnightly.”

The third element is Atheta-System, which sees the predatory beetle Atheta coriaria feed on sciarid eggs and larvae, as well as moth larvae and thrips pupae.

'This beetle has a large flight range, complementing the other two biocontrols,” explained Hellemons. “It also actively searches for prey and should be introduced for three consecutive weeks.”

To complete the strategy, Hellemons recommended yellow sticky rolls. “The Bug-Scan Roll Yellow can be hung between poles,” he said.“We supply plastic clips to secure the roll to the poles with tie wraps, so no glue residue is left behind.'