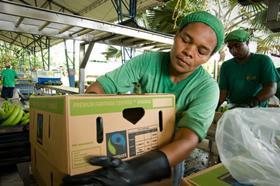 The steps have been outlined in a position paper released prior to COP26, the climate change conference held in Glasgow at the end of next month. The paper was signed by Fairtrade, the World Fair Trade Organisation (WFTO), the Fair Trade Advocacy Office and 14 other signatories from the global Fair Trade movement.

“Our planet’s farmers and agricultural workers are on the frontline of the global climate crisis,” said Dr Nyagoy Nyong’o, global CEO of Fairtrade International. “But far from being victims, they are integral in developing those key climate solutions that can reverse environmental degradation and pave the way towards a more sustainable tomorrow.

“That’s why the Fair Trade movement is raising its voice in this bold position paper – to ensure farmers and agricultural workers are included in the COP26 outcomes; to guarantee fair incomes for our planet’s agricultural producers; and to build back better and greener in a post-Covid world.”

“An economic system that thrives on the exploitation of our planet’s resources and our planet’s people is a broken economic system,” argued Juan Pablo Solís, Fairtrade’s senior advisor for environment and climate. “And climate measures that exclude fairness and climate justice from the core of their targets are measures that will once again fail to achieve real climate action. In Glasgow, global leaders will need to think inclusively if they want have meaningful impact in creating a sustainable tomorrow for all.”

Citing IFAD/CPI research, the movement’s position paper stresses that less than 2 per cent of climate finance makes its way to smallscale farmers. “Marginalised communities across the world are suffering the severest impact of climate change,” said Roopa Mehta, president of WFTO. “Their production practices and personal choices have contributed the least to the current climate crisis but they are the most affected by it. The call for climate justice requires that these communities have a seat at the negotiating table - their voices heard and their concerns addressed.”

“The world is at a crossroads and business-as-usual is simply not an option,” he warned. “Governments must take action to set the right policy framework for fair and sustainable global trade. This includes not shying away from legislating, since relying exclusively on voluntary commitments and market forces will not bring us any closer to achieving the Agenda 2030 objectives and the Paris Agreement.”