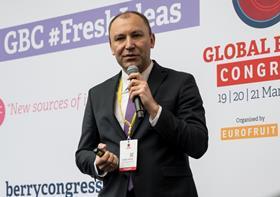 Fruitnet spoke to Andriy Yarmak, economist at the UN’s Food & Agriculture Organisation and a specialist in the produce sector in eastern Europe, the Caucasus and Central Asia, about the impact of the coronavirus pandemic.

What has the immediate effect of the coronavirus outbreak been for farmers and consumers in eastern Europe, the Caucasus and Central Asia?

Andriy Yarmak: The situation is very different for each country. Governments of all nations are reacting chaotically, often hurting their own consumers and farmers despite their intention to help. A good example of this is the closure of open-air markets and street trade in most countries across eastern Europe, the Caucasus and Central Asia. Unfortunately, decision-makers did not appear to realise that in some of these countries supermarkets account for less than 5 per cent of fresh fruit and vegetable sales. So farmers have lost their market and consumers cannot buy fresh produce. The decision has also led to much bigger crowds at retail outlets than if these markets had stayed open.

How have availability and prices been affected?

AY: A common problem we’re seeing is the closure of borders, sometimes even for trucks, which has caused the price of some products to skyrocket, while the price of others have collapsed. We are seeing a large increase in demand for items that store relatively well, such as potatoes, onions, apples and citrus. On the other hand, highly perishable goods, especially those sold at higher prices, are suddenly not being bought. People are trying to limit their visits to supermarkets and are stocking their carts with other types of things.

Understandably, given the situation, we are also seeing a sharp increase in demand for items that people perceive as healthy, including lemons, garlic and ginger. The price of such products has therefore gone up significantly.

How has the recent economic downturn impacted consumer purchasing power and demand for fresh produce?

AY: The purchasing power of consumers is a significant factor. In these countries, many people have lost their jobs due to quarantine requirements and the economic slowdown. These people do not have significant savings, while currencies have lost value and imported products have become too expensive. Altogether this has significantly affected demand for fresh produce, as a lot of fruits, berries, nuts and even vegetables are considered non-essential consumption items.

Low oil prices are an additional problem for exporting countries, which export large volumes of produce to oil-rich economies. The purchasing power of oil- and gas-producing countries has been reduced sharply and they are importing less. This has caused, for example, apple prices in Moldova to collapse at a time when they normally go up, as Russian buyers default on their contracts.

How about logistics? Are companies having to deal with extra costs?

AY: Logistics have become much more expensive. For example, Georgian exporters of hazelnuts are having to pay almost twice as much to get their product to the EU. However, even with these higher costs, very few transport companies are offering their services, as they have to cross many borders and the situation and regulations are changing almost every day. Many border crossing points are already completely closed.

Countries like Ukraine, which produces enough for local consumption and does not rely too much on imports or exports, are in the best position. It is a much harder situation for export-dependent Moldova and Uzbekistan, which also have to import significant amounts of vegetables and other products.

Are labour shortages an issue as they are in other parts of Europe, where fears are growing that produce will be left to rot on farms?

AY: Spoilage and food waste have increased due to interruptions in the value chains. If the situation remains the same, a lot of fresh produce will be wasted. Increased stockpiling in homes also leads to spoilage, even for storable items.

Farms in Ukraine are facing issues getting the labour to the fields due to limitations on public transportation and limits on the number of people allowed in one car or bus. This is increasing costs. However, in eastern Europe and Central Asia, there will be no shortage of pickers, as many of them have already returned home from Poland, Italy and other countries. Moreover, a lot of people have lost jobs in other sectors and might be available to make some money working on farms.