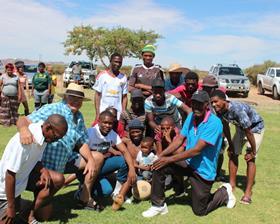 André Spangenberg (left) with the team at Groenheuwel

Announced during the COP26 climate conference, the prize came on the twentieth anniversary of Eosta’s partnership with André and Madaléne Spangenberg, producers of organic oranges, grapefruits, mandarins and lemons in Augrabies.

Eosta said it regarded long-term cooperation as a crucial point of departure for the creation of a more sustainable food system.

The partnership was nominated for its organic cultivation method, which produces fewer emissions and sequesters more carbon in the soil through the use of compost instead of artificial fertiliser, protecting the soil biome.

In 2020, Groenheuwel had installed 2,775 solar panels, for the generation of 2,393 MWh of electricity, allowing the warehouse to be operated largely on solar power.

'This has an extremely positive impact in South Africa since the South African electricity grid is 84 per cent coal-powered,” Eosta explained.

“Soil & More Impacts in Hamburg calculated that the production of organic citrus fruit by Groenheuwel for Eosta in 2020 saved approximately 280,000 kg CO2 in comparison with conventional cultivation, due purely to the growing method,” the company stated. “This will amount to a total saving of 5.6m kg of CO2 over the course of 20 years.

“Together with the saving in electricity consumption, which accounts for 2.3m kg of CO2, approximately 2.6m kg of CO2emissions are saved annually. This amount equals the carbon sequestration by 43,000 young trees over ten years, or the yearly emissions of310 households.”

'We are honoured and thank everyone in Europe who buys our organic citrus fruit,” said André Spangenberg. “Remember that organic agriculture is better for the climate. It is how you can contribute to a more sustainable world.'