The main agricultural union in France, FNSEA, has congratulated Emmanuel Macron on his re-election as French president, but urged him to make real progress on food sovereignty and sustainability in agriculture.

“The challenges of this five-year term are significant for our country: economic challenges, environmental challenges, social and societal issues,” the union said in a statement. “The deep fractures that have appeared across the country in recent years and have marked this presidential election, in particular the rural divide, call for a vigorous response.

“The FNSEA, as an intermediary body, will fully grasp its role of offering constructive proposals. When it comes to agriculture, the FNSEA solemnly calls on the President of the Republic to give national food production the importance it deserves. The health crisis and the war in Ukraine have reminded us of the importance of a return to food sovereignty in France and in Europe.”

During the election campaign, the FNSEA proposed 30 measures to achieve this. These measures are part of a clear strategy, the union said: to produce on French territories to feed the population, to achieve an agro-ecological transition and to provide solutions for the fight against climate change.

“This effort, which will enable women and men engaged in agriculture to live with dignity, to flourish and be recognised for their work in feeding the country – the primary objective, if ever there was one – merits bold reforms and pragmatic decisions,” the union stated.

“We expect the President of the Republic to entrust the next full-time minister for agriculture and food with implementing these 30 proposals so that the agriculture sector can contribute to France’s food and energy sovereignty and influence the EU in getting sustainable production back on the table in the European Green Deal.”

The FNSEA said that it was convinced of the opportunities for French agriculture, and vowed to be “a loyal, responsible and demanding interlocutor”, giving a voice to farmers in defending and promoting the vision of a French farming sector that is strong, bold and sustainable.

The Confédération Paysanne farmers’ union stated that “the worst had been avoided”, referring to the defeat of far-right presidential contender Marine Le Pen.

However, it stressed the importance of not losing another five years in the fight for an agro-ecological transition, criticising a lack of progress under Macron.

According to provisional results from the Ministry of the Interior, Emmanuel Macron won the vote with 58.54 per cent to Le Pen’s 41.46 per cent, a result largely determined by the former’s success in the big cities.

Macron’s first term was marked by the rise of the ’gilets jaunes’ movement, made up of unions, farmers, truck drivers, students and others protesting the spiralling cost of living, increasing inequality and regressive taxation. 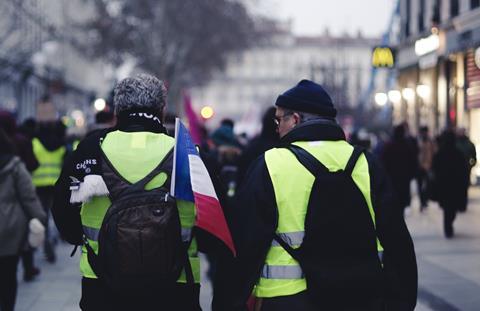