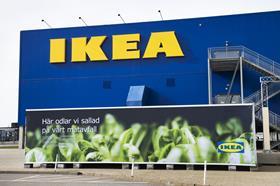 Furniture retailer Ikea is preparing to harvest its first hydroponically grown lettuces and eventually serve them to customers at two of its in-store restaurants in Sweden.

The lettuces have been grown under LED lights inside specially retrofitted shipping containers outside two outlets – one in Helsingborg and one in Malmö – using a so-called circular farming system developed by partner company Bonbio.

The retailer said the containers used 90 per cent less water and less than half the area required for conventional farming, as well as renewable energy for the lighting.

With their roots in water rather than soil, the 3,600 plants in each container get their required nutrients from organic waste, including food scraps from Ikea's own restaurants.

The lettuce will be served to Ikea staff only at first, but if the trial proves successful, it will also be incorporated into menus for paying customers, with the containers expected to appear outside more Ikea stores around the world.

'By 2030 we will be climate positive at Ikea,' commented Catarina Englund, innovation manager for the Ingka Group, which owns the majority of Ikea stores. 'Since food accounts for a large part of the world's carbon dioxide emissions, we also need to find new solutions to how we can grow food in a more sustainable way. Testing lettuce cultivation in containers is part of this.'