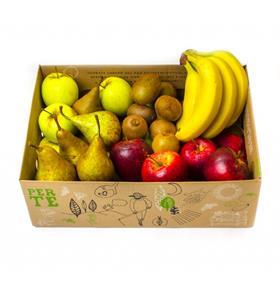 Demand for organic fresh fruit and veg appears to be rising steadily but significantly in Italy, and Made in Nature, a project financed by the EU and some of Italy's leading producers, is seeking to capitalise on that growing demand both at home and across the European market.

The project's backers embarked on a full marketing programme focused on autumn products this week with a special media event at Anuga, the biannual food trade fair which takes place in Cologne on 5-9 October.

Coordinated by CSO Italy and bringing together leading names in organic fresh produce such as Brio, Canova, Conserve Italia, Lagnasco RK Growers and VeryBio, the briefing confirmed the growing importance of organic fruit and vegetables – be they fresh or pre-prepared – to European shoppers, with the Italian market alone now worth around €3bn per year.

Figures published by Ismea and reported at the event indicate that consumption of organic products in Italy has risen by 102 per cent since 2013 and have risen by a further 1.5 per cent this year.

A bigger share is reportedly being sold through modern supermarkets, where sales rose by 5.5 per cent so far this year compared with a 7 per cent decrease in traditional stores.

Discounters, meanwhile, have seen their sales of organic products soar by 20.7 per cent.

Italy's own production area for organic produce recently topped 2m hectares according to the Ministry of Agricultural, Food and Forestry Policies, representing a total of 15.5 per cent of the country's total agricultural area.

According to CSO, sales of organic fruit and veg through major retailers and discounters have risen in the past 18 months, despite an overall contraction in the value of traditional produce.

It also observed that a period of late-summer sunshine had been a welcome boost for Italy's organic producers, notably those growing table grapes.

'We've seen excellent quality and good production of organic apples as well, which are particularly interesting because of the wide range of varieties that set Italy's offer apart,' the group commented. 'Interesting innovations like Candine and Story Inored are excellent quality, scab-resistant varieties.'

Alluding to a recent infestation of brown marmorated stink bug, which has affected several parts of northern Italy, CSO said the organic pear harvest had suffered problems in terms of quantity this year, but insisted that fruit quality remained excellent.

'Just as excellent,' it added, 'is the quality of organic processed products such as tomatoes used for processing.'