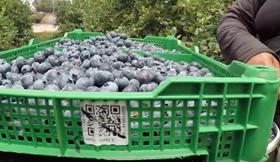 Berry company Naturipe Farms has provided more detail on its recent tie-up with SAP to develop the use of blockchain technology in its supply chain.

A new video published by SAP shows how Naturipe's blueberries can be tracked all the way from the point of harvesting using a worker-generated QR code.

The code remains with the fruit all the way along the supply chain, right up to the end consumer, Naturipe explains.

'The codes tell the whole story of the fruit, even in greenhouses,' the group notes in a press release. 'For growers, it tells them what conditions the fruit has been in, such as temperature, fertilisation and irrigation.'

Further data can be collected at any given time, it notes. 'It is all stored onto the QR code which can be accessed by anyone with a QR scanner, whether that is the grower, shipper, buyer or the end consumer. It is Naturipe's intention for all their berries grown around the world to have this QR code system.'

At present, most fruit is traced manually, using hand-written paperwork that accompany shipments.

'Just in that process alone, there can be delays of up to four hours for an air shipment, up to two days for a boat shipment for a product to get cleared and go through customs,' says Naturipe's IT Director Carol McMillan.

In future, data could be used to make better decisions relating to production itself, she adds. 'Freshness is imperative to keep people healthy. We can use all the data input from weather patterns and harvest data to eventually better forecast the future.'