New Zealand's kiwifruit export brand Zespri celebrated its twentieth anniversary last month, marking two decades in which the joint efforts of growers, packers and marketers to safeguard the value of fruit grown in both New Zealand itself and other countries around the world has resulted in one of the industry's strongest and best-known fruit brands. Last month,Fruitnet was given exclusive access to the Zespri archives. This has enabled us to take a detailed look back at the key moments that led to the trademark'screation, as well as the various stages in its own evolution over the past twenty years.

1904
The year it all began for New Zealand kiwifruit.Isabel Fraser (pictured left), a teacher from the town of Whanganui in New Zealand’s North Island, returns from a trip to China with the black seeds of Actinidia deliciosa.

1910
Market gardener Alexander Allison plants the black seeds. In 1905, the first kiwifruit were grown in New Zealand soil, although at the time they were still referred to as Chinese gooseberries.

1928
A breakthrough in kiwifruit production. Horticulturalist Hayward Wright(pictured right)succeeds in developing an exceptional cultivar of the Chinese gooseberry. His variety is remarkable thanks to its oval shape, delicious flavour and long shelf-life. Hayward sells the kiwifruit plants under various names, such as Wright’s Giant, Wright’s Large Oval, and Hooper’s Giant.

1933
Grower Jim MacLouglin plants Chinese gooseberries on his land in Te Puke, in the Bay of Plenty. The volcanic soil and mild climate of the north coast offer excellent growing conditions for the fruit. The first harvest is a success and is sold on the local market. Very soon, all three hectares of MacLouglin’s land are filled with the fruit. 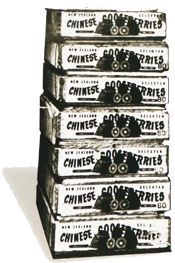 1952
Jim MacLouglin gives the kiwifruit business a new boost. Twenty wooden crates of his fruit are shipped to England together with a batch of lemons. The new arrivals are sold as 'Chinese Gooseberries' at Covent Garden in London, where they prove so popular the buyer immediately orders 1,500 crates for the next season.

1959
The Chinese gooseberry is officially named kiwifruit, a nod to New Zealand’s native bird as well as the nickname used for New Zealanders.

1973-74
The first kiwifruit to be grown near Whangarei are planted.

1976
The first kiwifruit to be grown in Hawke’s Bay, in the east coast of the North Island, are planted.

1977
Cardboard boxes are introduced for kiwifruit export consignments. Even at this early stage. New Zealand’s strict environmental legislation means the boxes are designed to be as ecologically friendly as possible.

1978
Growers begin to work with the Department of Industrial Science and Research, which carries out research into kiwifruit. In 1992, the group would change its name to HortResearch, and then in 2008 to Plant & Food Research.

1979
The country’s first organic kiwifruit is grown at David Sayer’s orchard in Katikati, near Tauranga in the Bay of Plenty. In the same year, various international standards are introduced, including one for flavour which stipulates that kiwifruit’s sugar levels must be a minimum of 6.2° Brix when harvested, so the fruit does not perish for at least four months.

1981
A start is made on cultivating the Hort16A kiwifruit variety, which will later come to be marketed as Gold. 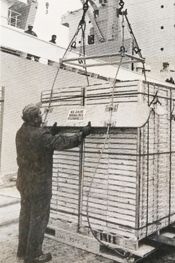 1984
In the year that New Zealand’s kiwifruit is exported to other continents by boat – to Zeebrugge in Belgium and Kobe in Japan – for the first time, a new quality system monitored by the NZ Ministry of Agriculture and Forestry is introduced. Meanwhile, as the first edition of the New Zealand Kiwifruit Journal is published, researchers begin to develop Integrated Pest Management – a scheme promoting best practice management of insect pollination and pesticide usage that will later be dubbed KiwiGreen.

1990The New Zealand Kiwifruit Marketing Board opens an administrative office for Europe, based in Antwerp.

1991
As New Zealand kiwifruit is exported to Finland for the first time, the marketing board goes a step further in consolidating its activities with the introduction of a new logo and slogan: The World’s finest – New Zealand Kiwifruit. The completely recyclable Ecopax packaging system is introduced, as is the spife (pictured right) – a combination of spoon and knife that promises to make it easier to eat a kiwifruit.

1995
A new standard encouraging further improvement in terms of flavour comes into effect. Measurements to identify rotten, dented or dirty fruit are also introduced. Meanwhile, organic kiwifruit is exported all over the world for the fourth year in a row. 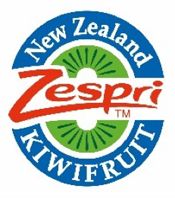 1998
Zespri’s offer is streamlined and modernised, with new marketing names for Green, Organic and emerging new variety Gold. The group also opens new offices in Italy and Spain, and wins a Major Exporter of the Year Award in the Bay of Plenty. 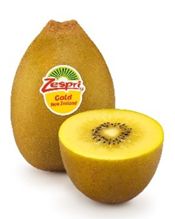 2000
Zespri’s fruit stickers are updated, with the background colour on Organic labels changed to brown.

2001
European production of Zespri kiwifruit begins in earnest. Gold supply from November to January and Green supply from December to April go some way to bridging the gap with New Zealand’s own seasons, which run from May to late October for Gold and from May to the end of November for Green. Back in New Zealand, the first organic Gold kiwifruit are harvested.

2002
Zespri relocates its head office from Auckland to Mount Maunganui in Tauranga. It also wins a second domestic trade award – Best Organic Exporter of the Year – and implements a new traceability system allowing it to track every carton of kiwifruit back to a specific part of the orchard where it was grown.

2003
Another New Zealand award, Superior Exporter of the Year, follows. Zespri and the New Zealand kiwifruit industry are awarded a EurepGAP certificate in recognition of their adherence to good agricultural practices.

2008
Zespri forges a strategic partnership with New Zealand’s Riddet Institute, establishing the Strategic Research and Scientific Advice group to look out how health factors and nutrients in food might be used to boost consumption. In the meantime, updated international rules on Brix levels in kiwifruit improve the eating experience for consumers, and a new television advert for Zespri Gold entitled The Walk airs in Europe for the first time.

2009
The New Zealand government and Zespri announce a funding boost for kiwifruit research to NZ$35.7m over seven years, more than doubling the previous budget.

2010
Zespri’s European headquarters moves to a new facility in Berchem, Antwerp. At the official opening, the company confirms the commercial release of three new kiwifruit varieties – an early-season gold, G3; a potentially long-storing gold called G9 known as Charm; and a new sweet green, G14, known as Sweet Green – as well as the start of orchard trials for two red cultivars. Elsewhere, the impact of actinidine, an enzyme present in kiwifruit and able to break down certain proteins, is proven. Later in the year, three weeks on from the discovery of bacterial disease Psa in a kiwifruit orchard in Te Puke, Zespri teams up with post-harvest suppliers, industry body New Zealand Kiwifruit Growers Incorporated (NZKGI) and the Ministry of Agriculture and Forestry to establish a new business to manage the industry's response to the outbreak. With kiwifruit producers in Italy facing a similar outbreak, the company begins working on a new plan to overcome the problem.

2011
New Zealand fresh produce company Turners & Growers fails in its bid to have Zespri found in breach of rules on commercial practice and its status as the country’s single-desk kiwifruit exporter removed.

2012
Zespri’s Psa recovery programme surges ahead with a plan to replace Hort16A, or Zespri Gold, with the more resistant yellow-fleshed variety G3, marketed as SunGold. The latter is introduced in 2012, with newly designed fruit stickers and packaging. The launch coincides with a redesign of Zespri’s boxes; whereas before they were either completely yellow or green, now they are clearly marked with the Zespri brand and the type of kiwifruit contained within. The group also launches its first fully biodegradable label, to be used for organic kiwifruit, and begins developing an organic spife.

2013
Zespri begins tweeting in Europe for the first time.

2014
Health benefits associated with Zespri kiwifruit are recorded in health claims in New Zealand, meaning they can be used for promotion and marketing campaigns in the country. Zespri also says it is working on the development of a new, peelable variety as well as a kiwifruit with edible skin, as it considers the commercial potential of eliminating the need to cut and scoop out the fruit.

2017
Celebrating 20 years of the brand, Zespri brings many of its growers, partners and service providers together for a week of celebrations in New Zealand. The company also releases more SunGold licences in Italy, as it aims for year-round supply of the new variety, and opens a new office in Dubai. As the 2017 New Zealand kiwifruit season approaches, the group unveils plans to begin using virtual reality experiences as part of its consumer marketing in Europe.

Read the latest issue of Eurofruit for more coverage of the NZ kiwifruit business and a wide range of other products, sources and markets. Click here to subscribe.