Sambóa all set to shake up apple segment

As the first commercial volumes hit the market, the architect of the Sambóa project, Marco Rivoira, explains why he has high hopes for the new brand 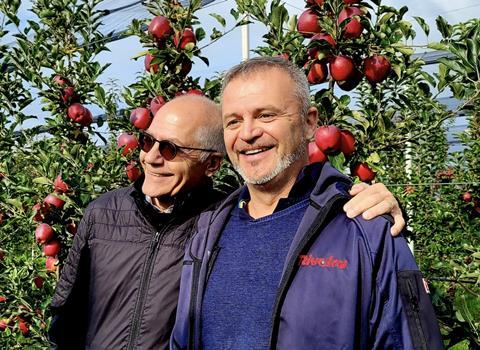 Italian apple specialist Rivoira Group has held a series of open fields day at its facility in Verzuolo, Piemonte on Wednesday to showcase the first commercial crop of its new Sambóa apple brand. The brand covers three sister varieties, Luiza, Venice and Isadora, picked ripe on the tree for optimum quality, and filling the early, middle and late picking window respectively to guarantee year-round availability.

“We are just starting the first commercial season with a few pallets of Luiza being sent to wholesalers in Rome, Bologna and Madrid to test consumer response,” explains the group’s CEO, Marco Rivoira, adding that a further 200 tonnes of Venice and 80 tonnes Isadora are due to be packed and shipped over the coming months.

After making its debut at April’s Fruit Logistica, the Sambóa project now moves into its next phase: to build an international network of grower partners capable of supplying the apples on a year-round basis from a single origin.

Sambóa’s global project manager, Gerhard Dichgans, believes the three varieties have all the right ingredients to make the brand a success and carve out a brand-new super sweet segment in the apple category aligning with the tastes of consumers in Europe and beyond.

As well as sharing a very similar and “exceptional” texture and taste profile, he says the trio have been selected for their formidable agronomic performance, combining a resilience to pests, genetic resistance to glomorella fungus and low winter chill requirements. A resistant skin well adapted to warmer climates, wide picking window (up to a month versus 10 days for Gala), and lengthy storage ability and shelf-life, meanwhile, help mitigate against two of the biggest challenges facing today’s producers: climate change and labour shortages.

“When we consider the extreme heatwaves of our European summer and we see how terribly many standard varieties have suffered, delivering poor quality and miserable pack-out when picked, the more we are convinced of the strong agronomic performance of our three sisters,” Dichgans tells Fruitnet.

To further reinforce the brand’s credentials, the new season crop will be certified by independent third-party auditor Bureau Veritas, ensuring compliance with Sambóa’s strict quality criteria and providing a further guarantee that each piece of fruit meets consumer expectations.

“Ripe on Tree is an integral part of our brand concept,” says Rivoira. “Research shows that consumers find as many as 70 per cent of the apples they purchase to be unsatisfactory. Our mission is to guarantee a wonderful piece of fruit, every day of the year.”

With 125,000 trees already in the ground, Rivoira says the goal is to reach 200ha of production by 2024 and eventually build up to 4,000ha worldwide by around 2036. The first test trees have already been planted in Chile and South Africa and trials will soon get underway in Australia, New Zealand and the US once plant material has cleared quarantine inspection.

For the CEO of a company that exports almost two-thirds of its apples to markets outside Europe, it comes as no surprise to hear that the scale of Rivoira’s ambitions are global. “Sambóa was absolutely created with markets like Asia and the Middle East in mind as the three varieties unite all the characteristics to appeal to Asian consumers,” he says, adding that the brand has already been registered in the main consumer markets.

Initially, however, the focus will remain on the European market. With a crop of 1,200-1,500 tonnes projected for next season, Rivoira wants to establish the brand in Scandinavia, Germany and elsewhere in Europe before volumes ramp up sufficiently to expand into markets further afield.

Rivoira says he has already received high levels of interest from growers and expects the concept to be just as warmly received by retailers and consumers. For now, there is still plenty of work to be done. Starting next year, the company plans to test different rootstocks and training systems, and to begin collecting data on productivity and quality to enable it to fine-tune its production process.

Rivoira has every reason to be encouraged by the varieties’ agronomic performance thus far. With the first harvest having emerged relatively unscathed from Europe’s hottest ever summer, he’s convinced that Sambóa represents a sustainable solution for growers grappling with the effects of climate change and wishing to avoid the commoditisation trap.

“Ripe on Tree is a guarantee of optimum quality, every time, for 12 months of the year,” he says. “That is our commitment to the consumer.”