Cities should grow their own produce, says report

Cities should aim to produce at least 30 per cent of their own fruit and vegetables by 2030 through tech-enabled food production, says a new report by the Tony Blair Institute for Global Change. 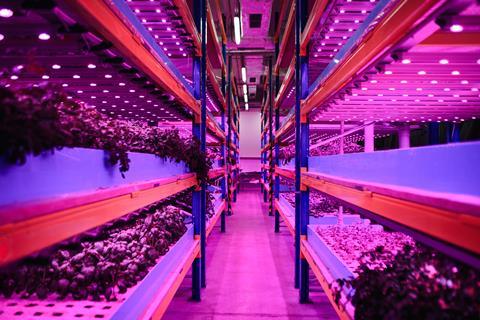 In a paper posted yesterday (28 April), the institute said cities must leverage technological innovations – particularly indoor vertical farms, greenhouses and precision-farming tools – to feed their growing populations, since it is estimated that by 2050, two-thirds of the world’s population will live in cities and will consume 80 per cent of all food produced.

“By leveraging innovations in urban agricultural technology (“urban agtech”), city leaders can diversify their food sources, thereby increasing their food resilience in the face of the growing threat of insecurity from general and nutritional scarcity – in particular, the lack of essential micronutrients like vitamins and minerals,” the report said.

“And they can do so while dramatically minimising the use of pesticides or chemical fertilisers and taking up much less land than required by conventional agricultural methods. Land that would otherwise be used to feed growing urban populations can instead be conserved as carbon sinks and wildlife habitat.”

In their report, the authors set out the following 10-point plan to boost food resilience in cities:

Cities should aim to grow 30 per cent of the fruit and vegetables consumed within their borders and the peri-urban area by 2030 to create a “buffer” against supply-chain disruptions, use land more efficiently, decrease food miles, and attract investment and good jobs, among other benefits.

City officials can maximise the potential of urban spaces by connecting gardeners and entrepreneurs to vacant lots, buildings and rooftops.

3. Update land use and permit regulations.

Commercial buildings are a rapidly expanding sector and can be leveraged to produce food.

Two of the primary barriers to adoption of indoor vertical farming and other urban agtech are high upfront capital costs and the long-term horizons for return on investment. Government support is necessary to bridge the gap until these endeavours become profitable.

6. Support research and development to optimise technology and bring down costs.

Funding and other support is needed to further urban agtech and supporting tech, such as more efficient light-emitting diodes (LEDs). Doing so will reduce energy use and therefore increase the cost-effectiveness of urban agtech overall.

7. Educate the next generation of urban-agtech entrepreneurs.

Urban farming provides an excellent solution to the decline of the agricultural workforce, but scaling urban farming will also require new kinds of skills and talent. Internships, school initiatives, masters programmes and a greater awareness of urban-agtech careers can help.

Often, produce grown indoors can’t be labelled as organic even if pesticides have not been used because it is not grown in soil. Appropriate labelling is necessary to increase transparency for consumers and improve consumer confidence in these products – either a new “controlled-environment agriculture” label, or expansion of the “organic” label.

9. Ensure controlled-environment agriculture lives up to its environmental promise by establishing appropriate benchmarking and addressing the energy-intensity problem.

Vertical farms are energy intensive but there are steps city leaders can take to help ensure this energy comes from renewable sources. This includes making subsidies and other support contingent on showing that best practices, such as those that will be published by the Resource Innovation Institute, are being followed. Policymakers can also explore the potential of microgrids and should encourage controlled-environment agriculture companies to take part in demand-side response markets.

Many urban and peri-urban areas already have thriving, diverse local food systems that are at risk and must be preserved.

The Tony Blair Institute for Global Change is a UK-based not-for-profit advisory group.