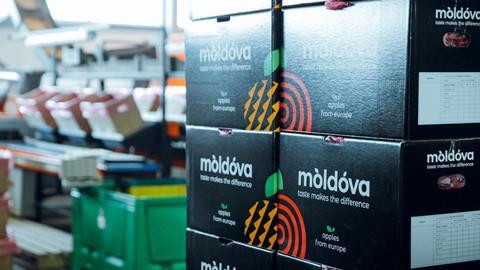 The country’s apple has expanded fast in the last ten years, and FreshTime and FarmProd recently became its first exporters to ship the fruit to India

More than 100 tonnes of Moldovan apples arrived in India in early January. Red Chief and Gala varieties travelled from the Romanian port of Constanta to Mumbai and Chennai in around 40 days. Traders from India have always shown interest in apples from Moldova, but only recently has it become possible to establish the first commercial linkages.

The five containers of apples were shipped by FreshTime and FarmProd, two companies with modern orchards supported by high-performance post-harvest infrastructure, such as controlled atmosphere storage and optical apple grading and packing lines.

The apple production and post-harvest handling processes of both companies are GlobalGAP- and Grasp-certified.

Click on either of the following links for a virtual tour of the FarmProd and FreshTime orchards.

Moldova’s apple industry has grown quickly in the past ten years. Farmers planted larger areas of intensive orchards with varieties in high demand such as Gala, Red Delicious, Fuji, Bonita and Granny Smith, complementing the wide range of traditional varieties. The infrastructure for storage and sorting was upgraded and packaging operations were improved, which demonstrated Moldovan growers’ commitment to adapt to the ever-changing realities of the fruit market.

Moldovan exporters have made enormous efforts in recent years to diversify their markets, and it is paying off. Last year, Moldovan apples were exported to 32 countries, up from 18 in 2021. What was once a niche activity for exporters, sending apples to distant markets by sea is now an established practice: more than 5,500 tonnes of Moldovan apples were shipped to the Gulf region in 2022 alone.

Moldova ranked among the top ten apple exporters in the world in 2021, with an average annual production of 550,000 tonnes and more than 225,000 tonnes exported.

Aside from apples, Moldovan farmers grow and export significant quantities of plums, apricots, sweet cherries, and table grapes. Moldova was one of the top five global exporters of plums in 2021, with these fruits reaching new markets year after year.

Moldovan producers and exporters exhibit with country pavilions at major international trade shows each year, including Fruit Logistica in Berlin, Germany, Fruit Attraction in Spain, and Macfrut in Italy.

In February, you can meet Moldovan growers and exporters at Fruit Logistica. We look forward to seeing you at our pavilion in Hall 7.2a, Stand A-11.