T&G Global sees technology as a key that can unlock new levels of efficiency in its apple orchards, according to its chief executive officer Gareth Edgecombe 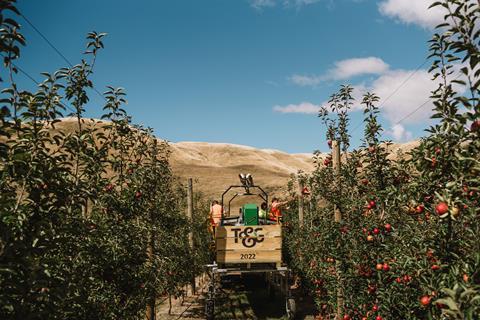 Gareth, where are things right now in terms of a move towards more automated harvesting and packing of apples in New Zealand?

Gareth Edgecombe: Well, in order for us to drive a more productive future, we have to think about that. Right now in Hawke’s Bay, we’re investing in a really big post-harvest facility that is pretty much fully automated. There’s a lot of automation that can go into packhouses nowadays, and we have a lot of capacity coming on stream with the growth of [the variety] Envy in particular. So that means we can scale up without doing so later.

What about in the orchards themselves?

GE: Then we’re also doing a lot of investment, as is the industry, in what we call two-dimensional orchards. This is where you basically train the tree on to a trellis to be two dimensions, rather than a three-dimensional shape. These are large-scale orchards but really flat, with almost a grapevine-type form and narrow gaps in between. The most important part is that you get uniformity of light conditions, so you get a very uniform apple, plus you get to apply automated robotic technology to those orchards.

Will we see robots in orchards any time soon?

GE: Probably the last thing we are going to see is robotic picking. We’ve done trials and we haven’t seen anything that’s locked down to be bankable. But there are lots of other processes such as spraying, thinning, counting and the rest that do take up a lot of labour now, and are on the cusp of being automated. So you’ve basically got a lot of movements up and down the orchard that won’t need people with that technology, which means those people can perform other harvesting tasks.

Unfortunately though, you do need to spend the money getting your orchards to that state before you can apply all of that technology. That’s really the investment that’s going in now. It’s a trend in New Zealand, but it’s also a trend in lots of big global agri-businesses. Even just those platforms, well-managed on a decent, two-dimensional orchard, they can double your productivity. It’s semi-automation, but it’s a long way further forward than we have now.