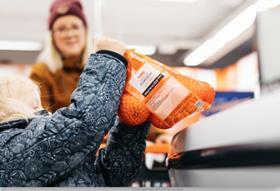 As part of its latest annual trend review, the chain surveyed 1,279 Finns and found that as many as 54 per cent were determined to eat a varied, healthy diet.

According to its own sales data, products that increased in popularity over the past year included mixed berry packs (+54 per cent), Chinese cabbage (+41 per cent), peppers (+23 per cent), broccoli (+21 per cent), and small citrus (+15 per cent).

“The Covid-19 pandemic has made Finns pay attention to their own wellbeing, and it has clearly also increased interest in ordinary, varied everyday food. People want to take care of themselves by eating well. We may ask if the era of fad diets is over,” said Heidi Jungar, customer insight director for K Group banner Kesko’s grocery trade division.

Products including berries, as well as non-alcoholic beverages and non-red meats, have apparently grown in popularity.

“The data also shows that this year, slightly more vegetables have been bought than before,” revealed the division’s commerce director Harri Hovi. “People are supplementing a varied diet with basic vitamins, and their sales have risen by 51 per cent compared to pre-pandemic times.”

In addition to a more varied diet, the survey found that, during the coming year, Finns are expected to appreciate local Finnish food and food supplied by small producers.

More than half said they considered local and small producers’ products to be trendy, while the corresponding figure for the youngest group of 18–24-year-olds was as high as 65 per cent.

“Next year, more and more people will also want to compare the sustainability of products in the grocery store,” the report added.

Finns also seem ready to buy more for seasonal foods. “I would say that interest in seasonal eating and knowing when each ingredient is at its best and most affordable is related to both considerate consumption and the desire to develop as a cook,” Jungar commented.

While traditional household skills are making a comeback as a result, there has also been an increase in demand for higher-quality, restaurant-grade prepared foods.