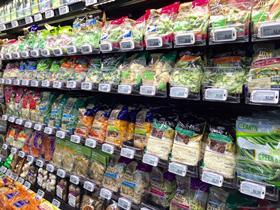 The most striking thing about the first ever 365 by Whole Foods Market store, which opened in May 2016 in the Silver Lake area of Los Angeles, is the sheer volume of fresh fruit and vegetable on display – reckoned to be around 30 per cent of the total store area, compared with around 10 per cent in other similar-sized outlets.

After announcing plans for a new store format that would meet what it described as “exploding” demand for more natural and organic foods, parent group Whole Foods has set about offering a combination of high quality food at more affordable prices. As Time Magazine's Money website described it, 'like Whole Foods, but you can afford it'.

The LA store, featured below in a video provided by our partners at Italiafruit News, is evidently focused on delivering both quality and value, and its fresh produce department is a massive part of that offer: it combines different layout elements more commonly seen in traditional greengrocery stores, convenience outlets and foodservice environments –markedly different to a traditional Whole Foods in several ways, with a large proportion of the fresh produce on offer sold loose.

For those fruits and vegetables priced by weight instead of per item, customers are invited to weigh and then apply a barcode ticket to their own goods, trimming cost from the store’s operating model.

Other innovations include digital price tags, LED lighting and carbon dioxide-powered refrigerators to reduce overheads, and the donation of all unsold food to charity, with the ultimate goal of achieving zero waste.

The response, according to group joint CEO Walter Robb, has been “overwhelmingly positive”. Two stores have already opened so far, in Oregon and Washington state, with a further 17 openings apparently due by late 2017.