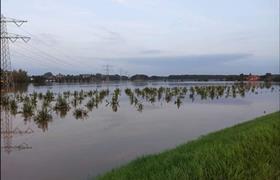 The extent of damage to the fresh produce business caused by catastrophic flooding in parts of Europe over the past week has slowly begun to emerge.

Record rainfall in parts of Europe including Germany, Belgium, Switzerland and the Netherlands has inundated fields, destroyed crops, and caused major disruption to production sites. As the waters subside, the cost of insuring horticultural enterprises will likely rise.

In Belgium, cherry orchards and open-field crops in the province of Limburg reportedly bore the brunt of the damage. And in Wallonia, the Walloon Agricultural Association said entire fields of crops had been washed away.

Dutch producer organisation NFO reported damage to sweet and sour cherries, red berries, and plums in Limburg, a separate, synonymous region to the east of the River Meuse in the far south of the Netherlands.

Crops that had not been covered appeared to be “largely lost” due to mould and cracking, while some covered crops covered had also suffered damage due to the high root pressure, it said.

Despite managing to avoid any flooding, the heavy rains caused major problems for blueberry growers in the region, because they led to the fruit softening and cracking as the harvest got underway.

“Hundreds of trucks of sand have been placed in bags along the Meuse,” said grower Harm Valckx. “Many volunteers, also from the associations in the village, worked with all their might to prevent a dyke breach. It was only a few centimetres away, but luckily we made it.”

The harvested fruit has not had such a lucky escape, although later varieties may fare better. “That's the hardest,” Valckx added, “that you cannot sort out all the bad fruits at harvest and the bad fruits are not always visible during the sorting process either.”

Elsewhere along the Meuse, apple, pear and cherry orchards were also flooded in places.

Nico Veldhoen, commercial director at Staay-Hispa Papendrecht, said it was difficult to assess the full extent of the production lost across Europe, but he indicated the majority of open-field crops would be lost in Limburg.

“It’s too early to say [for Europe], but what is grown in the province of Limburg is lost,” he reported. “The main production area at this time of the year is the German Pfalz area. How big the losses are there, until now there is no indication. There will be a problem for sure, but how big, nobody knows.”

Pfalz, part of the western German federal state of Rhineland-Palatinate, was one of the areas worst affected by the floods.

Gartenbau-Versicherung, a horticulture insurance company based in Wiesbaden in the neighbouring state of Hesse, said smaller streams had developed into “torrential rivers” in just a few hours, with some dams breached.

'The situation is catastrophic, but horticulture is not affected across the board,' commented the organisation’s CEO Manfred Klunke. “We are dealing with individual companies that suffered massive damage from the floods. According to the current status, this number should amount to three establishments.”

The company said a rapid rise in water levels had placed some nurseries under 3m of water, leaving behind a trail of destruction and 20cm of mud.

In Switzerland, meanwhile, the impact of hailstorms and heavy rain on the country’s vegetable production could apparently be felt until the spring of 2022.

According to the Association of Swiss Vegetable Producers, soil used to grow crops including courgettes, cauliflower, and lettuce had become so waterlogged that it would take a long time to recover.

Supplies of carrots, onions and celery are also going to be in short supply, it added.

As a result, the country will need to rely more heavily on imported produce in the weeks and months to come.

'The situation is unlikely to improve in the next few weeks, as you cannot re-sow in this weather,” said Markus Waber, the association’s vice-director.

According to Swiss news channel SRF, insurance claims linked to hail damage have amounted to SFr45m since June, more than the normal amount claimed during an entire year.