Hoogstraten has said that it is targeting the breakfast segment as a potentially untapped occasion for increased berry consumption. 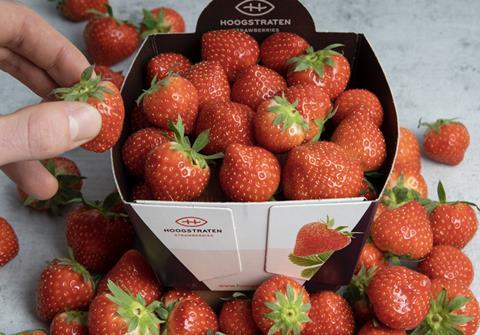 The grower-owned cooperative has launched a mixed berry snack pack into the Belgian market as it looks to explore the potential of berries, either as a standalone morning snack or as a healthy addition to cereals and other breakfast foods.

“As we have different soft fruit lines like blueberries, raspberries and blackberries in our portfolio, a mixed pack with strawberries is a quick fix,” explained Hoogstraten’s marketing manager Jan Engelen.

“We see huge potential with these mixes in the breakfast segment, as more and more people are choosing healthier options in the morning and berries is one of them.”

Hoogstraten is Belgium’s largest strawberry supplier, accounting for over 32,000 tonnes in 2021, a figure that represents 65 per cent of the country’s total output.

The lion’s share of its volumes remain the Elsanta variety, however the company has reported increasing popularity of newer Junebearer varieties such as Sonata, Sonsation and Falco.

Murano and Favori are the main varieties in the everbearer segment, Hoogstraten said, while the business continues to explore new possibilities in partnership with its trial station Proefcentrum Hoogstraten.

The cooperative said that it saw good opportunities for continued growth in the UK market this year, according to Engelen.

“Brexit and its effects on business have stabilised and our export companies are doing a great job working in the UK market,” he said. “UK retailers have also shown increased interest in our berries at certain times of the year and we are very happy to work with them.”

Hoogstraten is pressing ahead with its plans despite a challenging season characterised by increased costs of energy, raw materials, labour and services, which have had an impact on margins.

High gas prices and subsequent lower energy use has led to later glasshouse production, with returns to growers under severe pressure, the cooperative outlined.

Engelen warned that as a result growers could be tempted to turn away from production if the market doesn’t pay a price that justifies their investment.

“If the retail and wholesale sectors are not able to pay the price needed to grow strawberries in autumn and winter with these high added costs, our growers might not plant for late production,” he stressed. “The risk is too high and there is too much uncertainty.”