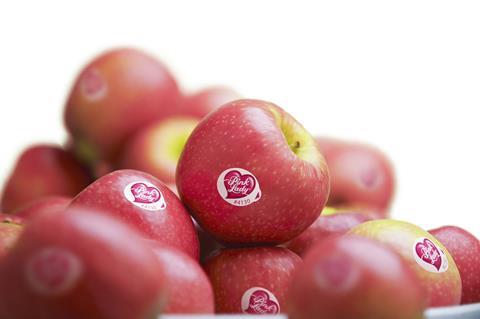 Pink Lady Europe has said that it has maintained a strong position despite a struggling apple market in Europe and falling volumes following the 2021 frost in the middle of the flowering season.

Some 173,000 tonnes of Pink Lady and PinKids apples (up 13 per cent compared to two years ago) were sold while more than 500 promotional operations were carried out.

”It is difficult to compare the 2020/21 season, in which the 200,000-tonne mark was exceeded, with the 2021/22 season, which was affected by adverse weather such as the frost in April 2021, causing the loss of 100 per cent of production for certain fruit growers,” said Pink Lady Europe.

”In a climate context that is expected to be more and more variable, it is important to note that Pink Lady Europe, through its Pink LAB incubator, is investing in identifying and developing innovative technical and technological solutions for increasingly sustainable production, allowing each producer to anticipate climatic variations and react as best as possible to protect their crops while preserving the environment.”

Pink Lady said it was proving it had gained market share in France (up 5 per cent), Belgium (up 3 per cent) and the UK (up 2 per cent).

In terms of volumes, Germany, the UK and France remained the top three once again, with 41,103 tonnes, 36,420 tonnes and 24,778 tonnes respectively, according to Kantar.

PinKids, the smaller sized apple for children, reached 5,400 tonnes, up 67 per cent when compared to two years ago.

Volumes of Pink Lady Bio (organic) increased by 87 per cent compared with two years ago, reaching 2,800 tonnes this season.

This figure should continue to increase, the group said, with 17 per cent of producers having already undertaken an organic CP/RG conversion and 7 per cent considering converting their Pink Lady orchard.

“Despite a season hampered by low yield and the downturn in the European apple market, Pink Lady Europe continues to grow. While waiting to see the real impact of the April 2022 frost, it is time to thin out the crop. We hope that future volumes will allow us to deploy engaging and meaningful operations more widely.”