The tough conditions faced by workers in the banana sector are highlighted in a collaboration between the Fairtrade Foundation and London-based ‘Banana Bruiser’ artist Anna Chojnicka to mark Banana Lovers’ Day on 27 August.

The Foundation commissioned Chojnicka to create a unique piece of art paying tribute to farmers and workers overseas growing bananas for UK consumers. 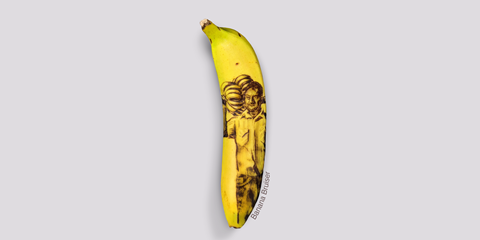 The aim is to shine a light on the hard work and low pay of banana farmers and workers in low-income countries across Latin America, the Caribbean and Africa.

“As someone driven by the values of social justice and sustainability, I’m delighted to collaborate with the Fairtrade Foundation to create this specially bruised banana artwork and to shine a light on the challenges facing banana farmers and workers overseas,” said Chojnicka.

“I create art by bruising (and then eating) a banana every day,” she said, “and I’m grateful for the farmers who work hard to produce them.

“When it comes to food, fairness and ethics matter – and sadly, they’re in short supply in many places. But Fairtrade means better pay and better prospects for banana growers. That’s why I use Fairtrade bananas for my artwork and it’s why I would encourage shoppers to choose Fairtrade as often as they can. Love the banana. Love the farmer.”

An image of the artwork and an accompanying video have been shared on Instagram, according to the Fairtrade Foundation, which hopes more businesses and shoppers will be encouraged to choose Fairtrade.

The Foundation said that fairer, higher incomes for growers were vital at this time for “protecting livelihoods, crops and communities from the damaging climate crisis and rising living, fuel and farming costs”.

Anna Pierides, senior supply chain and programme manager for bananas at the Fairtrade Foundation, commented: “The bruised Fairtrade banana carefully created by Anna Chojnicka is a vivid tribute to the hard work and sacrifices made by farmers and workers overseas, who are vital to ensuring we can enjoy this much-loved fruit here in the UK.

“The banana sector is an industry where production costs continue to rise, while market prices remain painfully low, placing a heavy burden on smallholder farmers and workers. For those without the financial safety nets and benefits that Fairtrade certification offers, the prospects can be dire – particularly as the climate crisis and cost of living crises continue to bite.”

A study commissioned by the Fairtrade Foundation recently highlighted the important role of the Fairtrade Premium in helping to bring banana workers in Ghana and Colombia closer to a living wage.

The study found that beyond cash benefits, the Fairtrade Premium adds value in terms of investment in workers’ housing, subsidised meals for workers, transport infrastructure and construction of schools and health centres.

“For example, on average the extra benefits generated through Fairtrade Premium for workers in Ghanaian plantations in the study is equal to US$75 per person per month, where the living wage benchmark in the region is US$257 per month,” the Foundation revealed.

“Our work is not recognised”

Juan Roberto, whose image features on the artwork, said that without Fairtrade he would likely be bankrupt as his bananas would be economically unviable.

“Our work is not recognised,” he lamented. “Those who consume the food do not know that the farmer has to go through many difficulties to be able to harvest. When a banana is spotless and of the best quality in a supermarket, it is the result of hard work from us, the farmers.”

In recent years, Fairtrade has taken concrete steps towards closing the living wage gap for banana workers, including launching the Fairtrade Base Wage in 2021, set at 70 per cent of the take-home pay needed for a living wage. This, it said, was unique among certification schemes.

Willy Paredes, a Peru-based producer representative from Fairtrade’s network of small producers and workers in Latin America and the Caribbean (CLAC), said it was clear that a combination of climate change and rising costs was a real threat.

“Climate change is already threatening [producers’] futures,” he said. “Now, they are telling me that earning a decent living from bananas has become even more difficult, because of the recent sharp rise in household, transport and agricultural costs they face. I believe many banana farmers and workers would be plunged into poverty without the financial protections that Fairtrade certification offers them and their communities.”

“This Banana Lovers Day, we encourage businesses and shoppers to choose Fairtrade bananas,” added Pierides, “so that even more banana growers can earn a decent wage, live comfortably, plan for their families’ future and enjoy the fruits of their labours.”