Organisations and charities in the UK have called on the government to support sustainable practices to avert food shortages in future, as the impact of drought continues

The UN’s United in Science report, published this week, concluded that current national pledges on greenhouse gas emissions were insufficient to keep global heating to 1.5C above pre-industrial levels.

In the short term, it revealed, there was a 93 per cent probability that at least one year in the next five will be warmer than the hottest year on record, 2016.

The UK saw its own temperature records beaten this summer, while recent rainfall has not been enough to replenish river, reservoir and groundwater levels following a sustained drought.

According to forecasts from the UK Centre for Ecology and Hydrology, conditions are unlikely to improve during the crucial sowing periods in September.

The Guardian reported that glasshouse growers were either choosing not to sow or waiting until spring for more daylight hours.

Meanwhile, crops usually widely available such as cabbages, carrots and potatoes are facing reduced yields due to the drought.

“The fruit and veg sector is undoubtedly in crisis,” said Rob Percival, the Soil Association’s head of food policy. “Many growers have suffered a 20 per cent reduction in the production of crops this year and most growers are anticipating further reductions in the year ahead. Without immediate and concerted action from government, we can expect to see growing businesses going bust and shortages on supermarket shelves.” 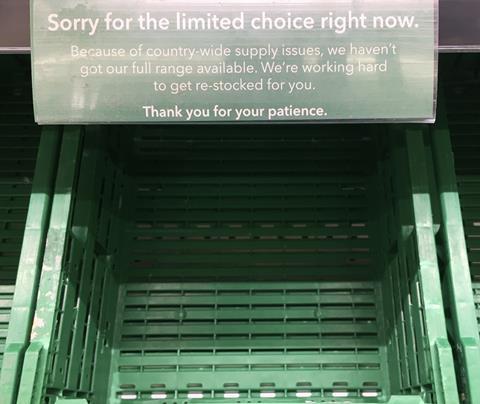 Ben Reynolds, the deputy chief executive of charity Sustain, commented: “The government may believe trade deals are the answer, if their plan is to let the British farming industry decline and import more produce, but these problems are global, and leaving this to the free market may in practice mean a very empty market. They need to step in and find a way to cut energy costs for food businesses and expand renewables capacity.”

The Soil Association is calling for more sustainable farming practices to be adopted by farmers and to be supported by the government.

“The government must deliver a comprehensive horticulture strategy that prioritises agroecological growing,” Percival said. “This year’s drought led to reduced quality and yield, and such impacts can only be mitigated if the right incentives are in place to support growing techniques that build soil health and organic matter.”

Rupert Way, a researcher at Oxford’s Smith School of Enterprise and the Environment, and a co-author of the paper, said that cost was no longer a reason to delay action.

“Past models predicting high costs for transitioning to zero-carbon energy have deterred companies from investing and made governments nervous about setting policies that will accelerate the energy transition and cut reliance on fossil fuels,” he pointed out. “But clean energy costs have fallen sharply over the last decade, much faster than those models expected.”